If It Only Had a Name!

Last night, while The Pit Boss and I sat down to watch the very last episode of Lost (I forgive you for all those hair-tearing cliff-hangers and WTH? moments now), I whipped down the very last stitches on the binding for The Bear's quilt.   It is done. 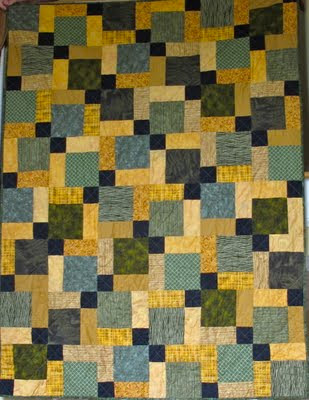 But not "done done."  Because the label isn't on.  Because I can't think of a name.

When I made my older son's quilt, it was a Bento Box pattern and he was graduating after nine long years from a school that is, to put it nicely, structured.  Is there an opposite to Waldorf/Montessori/Reggio?  This is it.  The poem, The Hundred Languages of Children, is about this school.

So I called the quilt "Out of the Box."

The Bear went to the same school for six years until we finally figured out that he was not ever going to thrive in that environment.  We moved him for middle school to a place that encouraged and loved and challenged his marching-to-a-different-drummer personality, where he truly showed what he is capable of and can never be compared to his brother or sister because no one there knows them.  Now he is going off to high school with his older brother, where's he always wanted to go. We are all so excited about the whole new world of opportunities and adventures that await him there.

His quilt is a Disappearing Nine Patch pattern.  I am completely stumped for a name.

For now it is fresh out of the dryer.  It was supposed to be finished by graduation.  You know, in June.  I had to get it done by today so he can sleep under it tonight.  Tomorrow my boy starts high school.

How is that possible?  This child whose pregnancy and birth were a roller coaster of scares and emotions; who suffered so mightily with true colic that the doctor asked me every few days if I were having thoughts of harming him or myself.  That same doctor assured me that these are the most loving children once they outgrow it, and he was right.  None of my children is as openly affectionate and in tune to my mood, a benefit I chalk up to the hours I held him and walked him and rocked him, back before I knew the words attachment parenting.  This is the child I rode with in the ambulance when he got pneumonia at Disney World; who once sagely asked me at the age of four, "Is it a rule that you have to go to the same school as your brother?"  The one who desperately wants to know how the world works and why and for how long.  The one who loves music and sports and his friends.  The one who won the election for Student Council President when he quoted The Breakfast Club letter in his nomination speech.  My baby.

Tonight he will sleep under his nameless quilt and tomorrow he will go off to 9th grade and geometry and geography and driver's ed.  Tomorrow I will make him pose again for a picture, holding the sign that says, "First Day of School 2011" just like I have for the past eleven years.  Tomorrow I will smile a lot and laugh a little and let just one tear escape.

"A parent owes a child two things:  roots and wings."
Chinese Proverb
Today I will cherish the mundane moments, driving to guitar lessons and team pictures.  I will make conversation and act like nothing is changing.

But his quilt needs a name.  Suggestions welcome!

Email ThisBlogThis!Share to TwitterShare to FacebookShare to Pinterest
File under: Deuce, My Middle Child, quilt, The Pit Boss