It's been pretty quiet around here, and that's mostly because I have been working on a top secret project for The Pit Boss's 50th birthday. 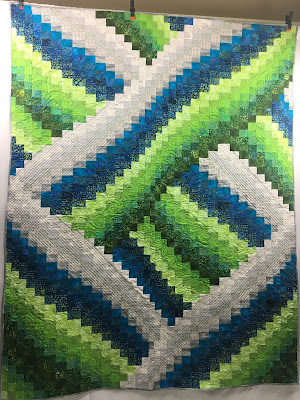 I know you (and he) thought I was making the Disappearing Pinwheels quilt. I thought I was, too. But in July when he had to go out of town for ten days, I found that I wasn't really loving it. Don't get me wrong; I still like the quilt, but it just didn't feel like him to me. I was also having trouble finding a layout that I liked, so I decided to start over. 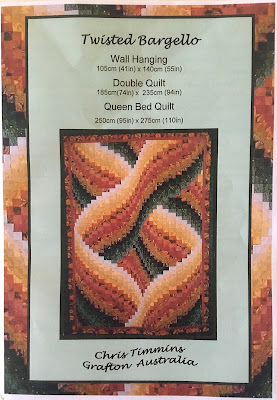 While looking through my patterns, I came across this one that he actually picked out himself on a surprise trip to Callaway Gardens back in early December, 2015. He had also found a quilt shop nearby called Sunday Best Quiltworks, where he saw this Twisted Bargello pattern by Chris Timmins of Grafton, Australia. He chose a deep turquoise fabric as well, and we both promptly forgot about it. 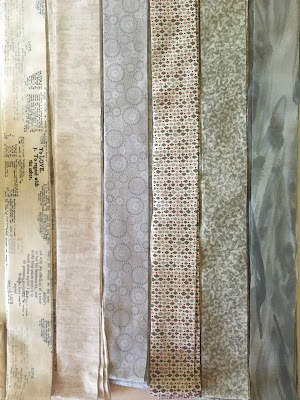 Choosing 20 fabrics was a challenge, but the turquoise was a good start. I decided to make the full sized quilt without the borders, since his main complaint about the first quilt I made him is that it's too small. I liked the feeling of the grays that I had chosen for the Disappearing Pinwheels quilt, and was able to pull six from my stash, including two from our trip to Boston. There were a few blues and greens I liked, but not enough, so I headed over to Intown Quilters to fill in the blanks. 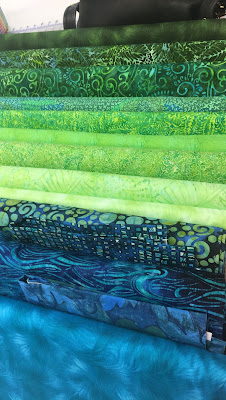 The woman working in the shop that day was a huge help, not only with selecting the fabrics but helping me put them in the correct order. That was critical! Once I got home, I had to make a key that I left on my design wall. I spent the next four months hoping that he wouldn't wonder what those little squares were for. 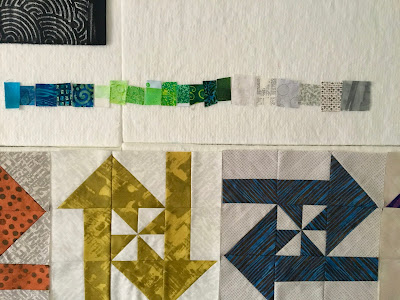 I began cutting strips, and quickly realized that math had, once again, gotten the best of me. I had purchased a quarter yard of each color instead of a half yard! Luckily, Intown Quilters has an online presence AND their receipts are very detailed, so I was quickly able to order the extra fabric and have it shipped right to the house. 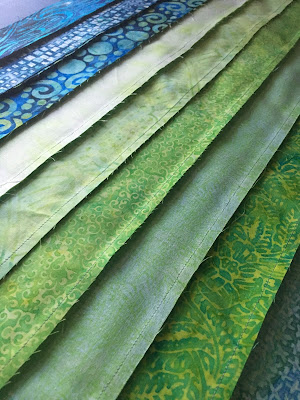 While TPB was gone, I managed to get all of the strip sets together.  Once he came back, though, I had to get creative with my sewing time. I started cutting the strip sets according to the detailed map in Chris's pattern. Every time TPB walked the dogs or worked late, I would cut a few more strips. Find My Friends became my favorite app, as I used the option for it to notify me when he left his location so I could tuck the strips back into the closet before he came home. 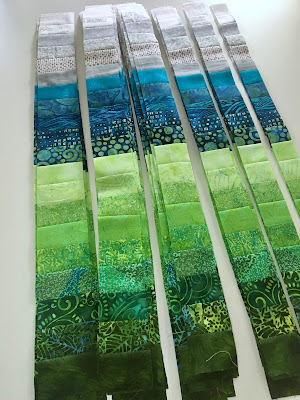 I used every minute I could find to start assembling the columns, while still occasionally working on the "decoy quilt" so he wouldn't get too suspicious. It became obvious that the Disappearing Pinwheels was not going to be finished by his birthday, so he gave me more and more grief about it with each passing day. 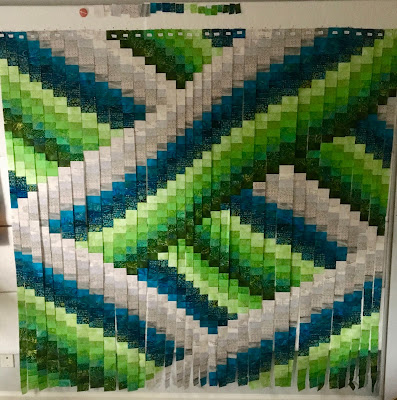 Finally there came a point when I couldn't go any further without putting the columns up on my design wall, which I couldn't do until I had a few days alone. Thank goodness he had scheduled a guys trip to Vegas a few weeks before his birthday. I took a vacation day from work and sewed all weekend long. 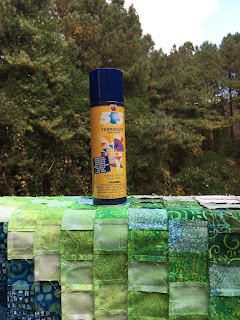 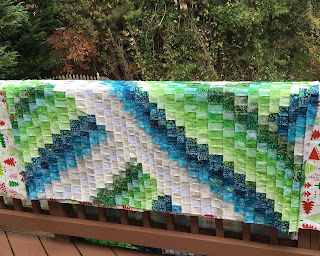 By lunch time on Saturday I had the top together and had to make a crucial decision: should I give the quilt to my longarmer, who was unsure if she would have time to finish it, or just go for it and quilt it myself? Grace convinced me that I could do it. I decided that, with the minky back, I was going to have to spray baste it. That hasn't always worked out for me with other brands, but I decided to give the much lauded 505 a try. It worked great! 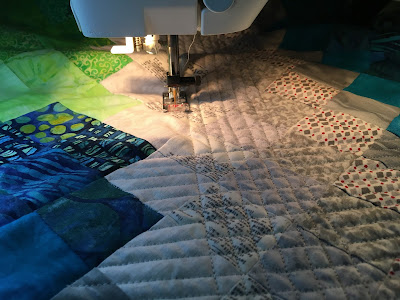 I went with straight line quilting in the gray areas and let them overlap where the lines intersect. In the blues I did a curve similar to Angela Walters's serpentine line. 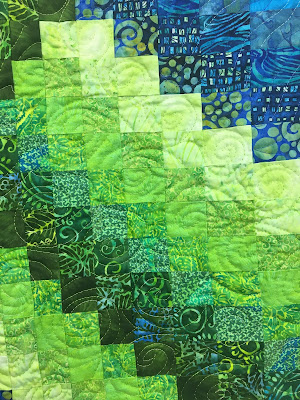 And in the greens I quilted the swirls I learned in Angela's class at QuiltCon. 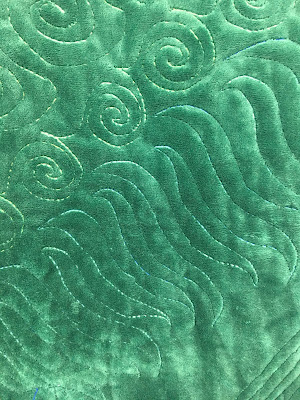 The minky back hides a multitude of sins and is so cozy! I managed to get the whole thing quilted and the binding made before TPB came home from Vegas. 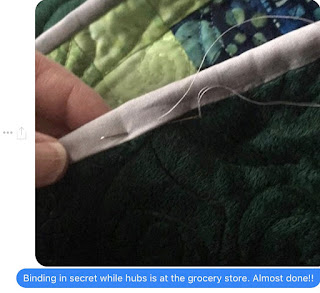 Then it was just a matter of getting the binding whipped down and the label on. It was getting so close to his birthday, but he was always around! It got to the point that I would stitch a few inches of binding while he was in the shower or ran an errand. 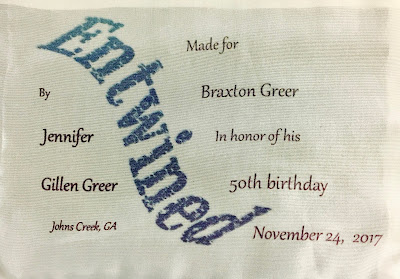 Finally it was complete, and Friday night was the big reveal. I didn't get any great shots of his reaction, but he swears he was really surprised. 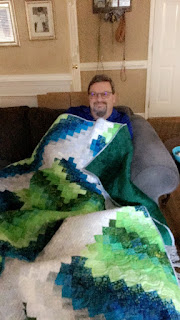 To my amazing husband, who supports and encourages me in all I do, who makes me laugh all the time and cry only tears of joy: I love you and wish you the most fabulous new decade. I can't wait to see what this one holds for us!

I don't know that I would have had the courage to do this without the blog hop this summer, so I want to say thank you to Angela and Christa, HollyAnne, Kristin, and Vicki. You inspired me and kept me going!

If you made it all the way to the end of this post, congratulations! I know it was long, but so was the road to get here. Thanks for reading!