I cannot believe it is already the last day of 2012!

It seems like not that long ago I was making resolutions and plans for this year...and listing UFOs and WIPs...not one of which were actually accomplished.  And that Studi-O-rganization Challenge?  Ha! (Although I'm sharing the blame with Allison on that one.)

I have been in a bit of a fog, having to think hard about once mindless tasks and sleeping a lot.  I'm not sure if it's the weather or if I'm having some sort of age-related issue, but I just feel blah.  Not sick.  Just foggy.

In trying to get my groove back, I started work on a paper piecing project.  I got the two halves done, only to figure out that one half was upside down and backwards.

I decided to move onto something a little easier - this adorable Disappearing Nine Patch I saw on Pinterest.  Christina from A Few Scraps showed me how simple it would be.  And it was.

That's not to say that I had no trouble in my foggy state.  I managed to wind an entire bobbin without realizing that the thread was lined up wrong.
I also did some bad math and screwed up the very first cut when dividing the first set of nine patch blocks.  Luckily I had extra of that particular fabric and realized it before messing them all up.

But I powered through and have finished the top.  I'll be bringing it to Mom today so she can start hand quilting it.  None too soon, either, since the baby's due date has gotten bumped from early February to a firm January 15. 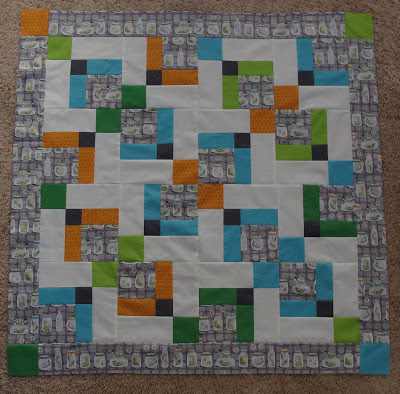 We are all excited to meet this precious little boy who my cousin and his wife are expecting.  We are extra excited because the baby is the first - and maybe only - boy to carry on my maternal grandparents' name.

I found this fabric for his quilt way back in April on our Spring Break trip to Tennessee - which I am just now realizing I never blogged about.  Sigh.  It is just perfect since both my uncle (the grandpa) and my cousin (the daddy) are science teachers.  Isn't it gorgeous? 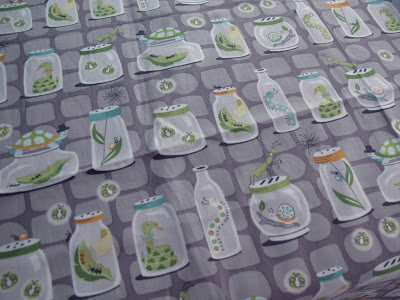 So here's to getting my groove back, one stitch at a time.  I wish you all a happy and safe New Year's Eve, and hope to see you sewing tomorrow for the 1st Annual Quilts of Valor New Year's Day Sit and Sew, or whatever you choose to work on.

It's been a long crazy month with absolutely no projects finished. In fact, I've barely touched my sewing machine!

Here's hoping that I can spend a few hours participating in the Boxing Day Sew In - #BDSI - organized by Sandy from Quilting for the Rest of Us - and find my missing mojo.

Hope you'll join us, even if it's just to pop in and say hi.

P.S.  The easiest way to see what's going on is to visit the TweetChat room for #BDSI.

Email ThisBlogThis!Share to TwitterShare to FacebookShare to Pinterest
File under: holiday

I got nothin'.  Please use your imagination and picture an interesting picture or inspiring content in this space.

This feels completely anticlimactic. I really thought I should have some cool post or giveaway here today, but my brain is completely fried.  Mostly because I have done NONE of the holiday grand plan this year.

Who decided that the last repeating date of the century should be right before Christmas?  Sheesh!  I'm BUSY!

Next time let's do it in February.  Or July.

Today my kitchen is hopping!

I'm baking for our guild's annual holiday party.  The theme is A Tribute to Redwork, and Ben has asked us to use as much red and white as possible.  What could be more perfect than a white chocolate cheesecake with raspberry topping?  (Recipe below.)

I'm also bringing one of our new favorite crockpot dinners to a friend.  I make these beef short ribs with some rice and roasted asparagus, and my family inhales it.  It's not one of those complicated crockpot recipes with a lot of browning or chopping or multiple steps either; no, this one has 4 ingredients and can be assembled in under 5 minutes!  Perfect for this busy month.

We've run out of our homemade hot cocoa mix, so I grabbed the ingredients for that and stirred up a batch while the cheesecake was in the oven and the Nutella Cakes were in the freezer.

After all that my family will still expect dinner, so I'm experimenting with a new baked potato soup recipe.  I'll let you know how it turns out.

What's new in your kitchen?

Crust:
Melt butter and combine remaining crust ingredients until well blended.  Press mixture over sides and bottom of an ungreased 10" springform pan.  I put foil around the bottom and sides on the outside of the pan to prevent dripping in my oven, but that is not a necessary part of the recipe.

Filling:
Combine cream cheese and sugar and beat until soft and fluffy.  Add salt and mix well.  Add eggs, one at a time, keeping mixer on lowest speed and beating just until each egg is incorporated.  Fold in chocolate.  Pour into crust and bake 40 minutes.  Remove from pan and let stand for 10 minutes.


Happy first Sunday of Advent.  This year our newest parochial vicar shares his thoughts about keeping Advent appropriate and saving the Christmas celebration for when it is actually Christmas.

If you celebrate Advent, how do you keep the focus on preparation?

Email ThisBlogThis!Share to TwitterShare to FacebookShare to Pinterest
File under: holiday

A few weeks ago I met a friend for lunch at The Fickle Pickle in Historic Roswell.  It was a beautiful Saturday, and people were out shopping and lunching on patios.  As luck would have it, there was also an Angels Among Us pet adoption going on in the parking area.

(Loyal readers may know that Angels Among Us is also the group through whom we adopted George.  This will be important later.)

I was averting my eyes and walking away like any normal person who already has two mutts at home.  My friend and I ate our lovely lunch and had a wonderful chat before heading back to the car.  As we walked back I glanced over and saw a beagle at the adoption.  He was looking at me.  I had to pet him.  Once.  Just give him a little love.  He reminded me so much of our sweet beagle boy, Divot.  His name is Duffy.

Petting him was a mistake.  Picking him up?  End of story.  He was so sweet, laying in my arms.  I asked about him - surely an adorable beagle would be adopted quickly.  But no, they think he's about 8 years old and geriatric dogs are so much harder to place.

A homeless, elderly beagle?  How could I leave him.  I texted The Pit Boss a picture.  For the record, TPB is at least as big of a dog lover and sucker for homeless animals as I am.  I put Duffy down and walked away, but he tried to follow me.

I called home and said, "If the answer is no, tell me now because otherwise I'm bringing this dog home."

The Pit Boss said, "Do what you gotta do."

I think he might regret that a little bit now.

I asked what process I would have to go through, knowing that a home visit and background check were in order.  I told them we had adopted through them in 2011.  They asked who I adopted last time, and I said, "Georgie."

What are the odds?  The woman who found George was right there.  She pulled up a picture of him on her iPad as I was doing the same on my phone.  And guess what.  She also found Duffy.  In the same neighborhood.

(Yes, I asked the question.  What is up in that neighborhood?  She said she thinks people know she lives there and possibly dump dogs knowing she will save them.  Unreal.)

Which meant that I got to take him home right then. 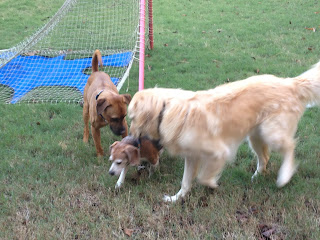 After the chair in Gracie's room, Duffy has found his favorite spot: 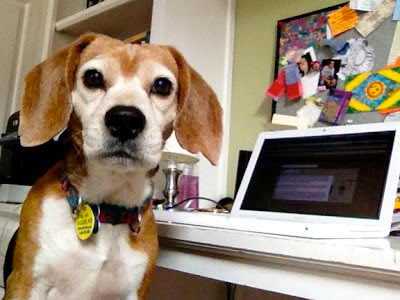