He's Quite a Catch 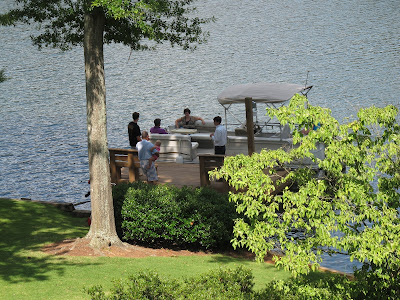 One of the most fun days we've had this summer was a Father's Day family reunion/picnic with The Pit Boss's side of the family. There were babies we'd never met from across the country, cousins we haven't seen in ages, and kids who keep growing faster than I can believe.   The lake and fishing were first in my mind, especially after finding this cute idea on Pinterest from Tidy Mom. 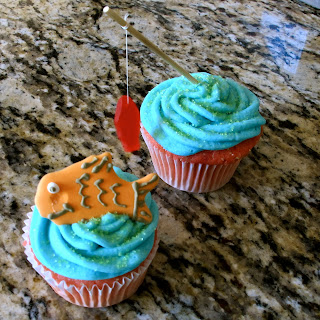 My mother-in-law put me in charge of desserts. I decided that a variety would be better than one giant something to feed fifty people! I happened to stumble across Sweetopia's post about making cookies for a virtual baby shower. Not only did I use a few of the recipes (these Nutella blondies are to DIE for!) but Gracie and I quickly became addicted to her tutorials, recipes, and how-to videos. 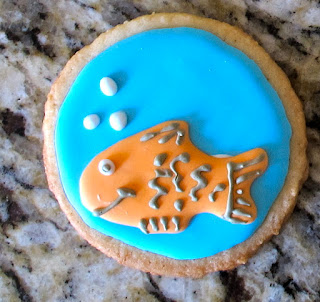 After watching the tutorial about making royal icing decorations, Gracie drew a fish and then traced over it with royal icing onto waxed paper.  We used them on a round cookie instead of fiddling with a fish shaped cookie cutter, and also added them to some of the cupcakes. 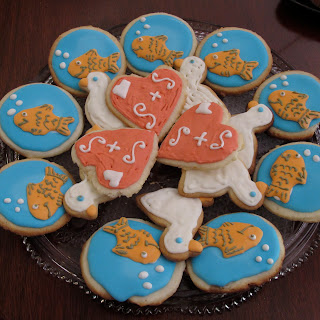 They were so easy and turned out great.  (Obviously the tutorial I need to read next is about taking good photographs of food.)  We also made some other cookies, including a few hearts for a little fun with TPB's cousin who is newly in love after a life of cynical disdain, and who has mocked our heart-on-the-sleeve romance for twenty years.   Imagine our delight when, instead of being annoyed, she called her beloved over to the table to take a picture of the cookies!