#LDSI Report and What I'm Reading

We had a fun and productive Labor Day Sew In (#LDSI).  I've gotten my block for the WannaBees group quilt bound and the required buttons put on.  The only thing it lacks now is the bling on the chandelier and my "dog related item."  The obvious thing would be a dog bed, but I am at a loss as to how to do that, especially now that it is bound.   I have a scrap of red wool that I could applique down, but I'm not sure what shape will work best. 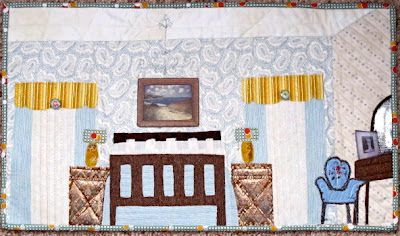 I also finished the top for the project I started on retreat, my Christmas tree skirt/table topper.   I had a moment of fury when I realized that the directions for putting on the border were wrong, and I had to walk away for the night. 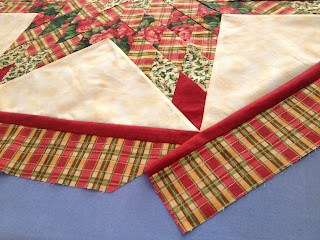 The next day I went back and removed one whole edge and redid it, which was well worth it but still annoying.  I had tried to be so careful through the whole process so I wouldn't have to rip out with all those bias edges. 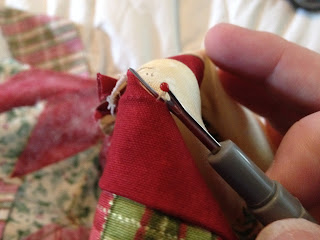 I think this will end up being a table topper because the center came together so nicely.  Also, it is a little small for a tree skirt - only about 40" wide.  We have a square pub-style table in our kitchen that I think will show this off nicely. 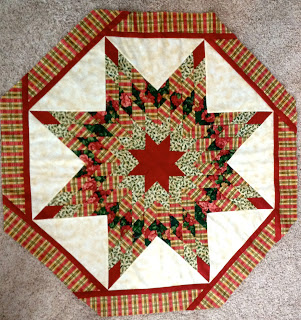 I've been googling ideas for how to quilt it and seeing a lot of stitch in the ditch for the star and a motif in the background.  Anyone have any other great suggestions?

That's about all the sewing I did because I was completely engrossed in three books.  I finished Gone Girl

by Gillian Flynn for book club.  I absolutely loved this, and not only because I am one of those true crime junkies so accurately depicted in the novel.   The Pit Boss was reading it til the wee hours of the morning, and nearly threw it across the room, grumbling about how it had kept him up so late.

Then I read the startlingly connected book Defending Jacob

, which has been recommended to me over and over again.  This one was also very good, impossible to put down, but deeply disturbing as the mother of teenage boys.

Last, I read our "alternate" book club book (translation:  no one could agree on just one),  The Light Between Oceans

. Again, this book hit very close to home since it deals heavily with the impact of losing a baby on a marriage.  Knowing the subject matter, I was reluctant to even start this book, but then Tanesha from the Crafty Garden Mom podcast mentioned it on an old episode I was listening to, and I took it as a sign.  This was a well written story that completely captured me but which made me sad.

We also caught up with friends, had some lovely dinners with people we love, and generally enjoyed turning off the alarm clock.

How was your Labor Day weekend?