Gifts From the Kitchen - Even Better Snickerdoodles!

I know I shared my snickerdoodle recipe with you all last year, but I've learned of a way to make these simple cookies even better!

The Pit Boss called on a client at a local movie theater where they bake their own brownies and cookies every day.  It was while we were on the crazy cleanse, so they were off limits.  He said it was the most difficult day he faced the whole four weeks!

On top of the heavenly bakery smell, he realized that the baker had combined two of his favorite things to make an even more perfect thing - snickerdoodle sandwiches with cream cheese frosting filling.  He's been talking about them for weeks, so I decided to test them out for our Homecoming tailgate party.

I made regular snickerdoodles, but flattened them a little bit before I baked them.  Not too much!

Then whipped up some cream cheese frosting, tinted it green for our home team, and smeared a little bit between two cookies. 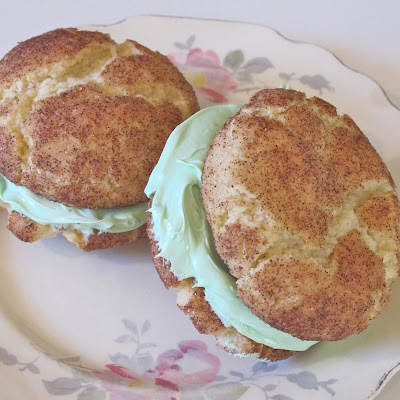 And, just for you, my peeps, I threw a few in the freezer to see how they would hold up.  I thawed them out today to taste (purely in the interest of science!) and they were just as fantastic as when they were fresh.

Email ThisBlogThis!Share to TwitterShare to FacebookShare to Pinterest
File under: holiday, organized home