My Favorite Things - How to Make the Sudoku Quilt

My dad's 70th birthday present, the sudoku quilt, was a big hit!  I know these are all over the place and have been done a million ways, but I thought I'd share how I did it. 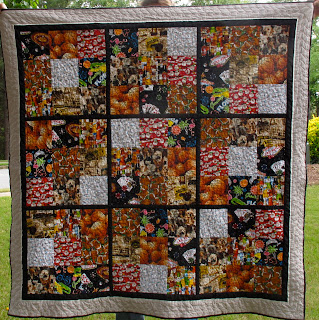 You need nine fat quarters of novelty fabric.  I cut these into nine 6" squares.

Then I found a sudoku pattern online and solved it.  Each fabric was assigned a number, and I started sewing them together.

I put 3/4" black sashing in between the squares and a 1 1/2" black border around the whole puzzle.  Then I made a little skinny dimensional border (I don't know what it's called but it kind of looks like piping).  Basically it was a 1" strip of white, pressed in half, and basted to the first border before adding a 3" grey border.

Are you so impressed with my mitered border?  I know it is not a big deal to some of you, but these produce a huge amount of anxiety for me.  I used this tutorial and only had to rip out one of the corners.

I stitched in the ditch around the sashing and borders.  Then I did a loopy meander in each block.  Last I did a design I've seen somewhere (but can't remember where - probably Leah Day but I can't swear to it) in the grey border that reminds me of a capital cursive L. 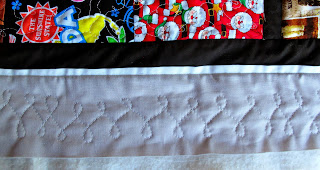 The blocks measure 16 1/2" and the finished quilt with these borders finished at a cozy 60" square.

If you want to make this quilt you will need:
If you make one I would love to see it!