Going to guild this month was like waiting for your birthday.  Our speaker was a "mystery guest", and even the WannaBees who were in on the secret wouldn't tell.

I was extra-excited when Mom, Gracie and I got to the meeting and found the front tables, normally laden with quilts or items for sale by the speaker, dressed up for tea with tablecloths and beautiful trays of dessert.  Who could it be?

Imagine our surprise when we saw that it was Betsy Ross, in honor of my our nation's birthday! 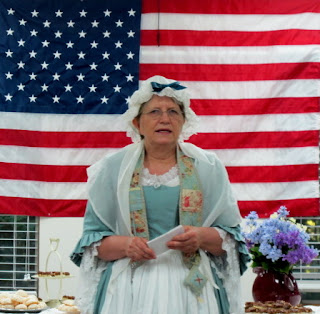 Our guest's name in real life is Muriel Pfaff.  She impersonates and educates on a variety of famous historical women, dressed in costumes she makes herself, right down to the toe buckles. 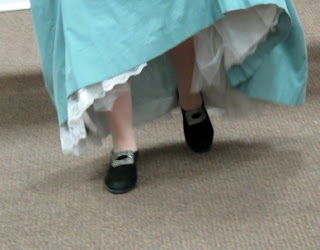 I learned a lot about Betsy's life that I had never heard before in 17 years of schooling and 4 years of teaching young children.   My favorite part of the story was about Betsy's Great-Aunt Sarah.  GAS (as I like to call her for short) lived with Betsy, her parents, and their other 16 children.  In her day, GAS had run her own business making corsets and underwear (and a little hard cider...shhh!).  She was an accomplished seamstress who taught Betsy to sew, but also passed down her independent and resilient spirit.  All of these things would be vital to Betsy's survival and success as she buried three husbands and helped birth a nation.  When times got tough and the easy thing would have been to move back home with her parents, Betsy remembered Great-Aunt Sarah and made it on her own.

Another story I loved, and one more of us have probably heard, was how George Washington initially came to Betsy about a flag.  He had some idea in mind of a square flag with six-pointed stars.  Betsy not only preferred the rectangle shape, but showed him just how much easier and faster five-pointed stars would be when she folded a swatch of fabric and made a perfect star with one snip of the scissors.  He was so impressed that he bowed to her judgement on the design. 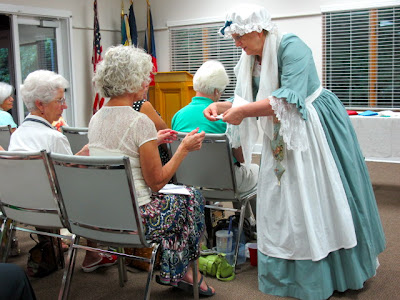 Muriel taught us how to make that perfect five-pointed star with one cut, just the way Betsy did to amaze President Washington.    Here's how you can do it too! 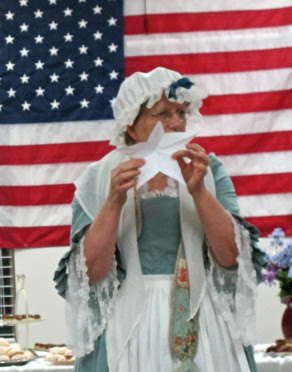 Muriel  performs as several other famous women in history, and has a quilt for each of them. This is the Betsy Ross Quilt. 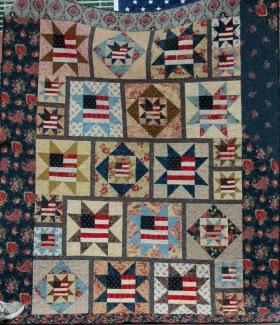 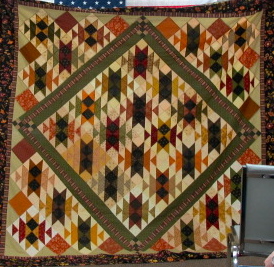 And here's Jodi examining the beautiful map fabric on the back of the Amelia Earhart quilt. 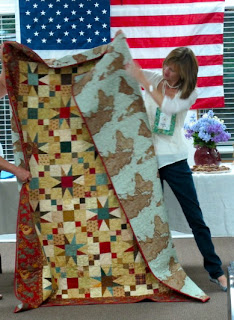 Finally we got to taste the delicious desserts.  They are all made from recipes of Betsy Ross's time, although Muriel says, "If you think Betsy Ross had time to bake cookies you're crazy."  The pecan bars were delicious, and Mom said the macaroons were light and airy.

What a wonderful way to spend an evening.  What would school be like if history came alive like this instead of boring children with some dry textbook?  The people who dreamed up our country didn't do so by answering the questions at the end of the chapter.  They did and saw and heard...took big risks and leaps of faith.

In honor of Betsy, next time you have to make a big decision, when you're tempted to take the easy way out, just ask yourself, What Would Great-Aunt Sarah Do?